Gone-Away Lake by Elizabeth Enright, is a delightful, beautifully written story, and one of those books that stirs my desire to explore.

Summer has a magic all its own in Elizabeth Enright’s beloved stories about two children and their discovery of a ghostly lakeside resort.-Amazon.com

The story begin with a brother and sister who arrive via train from the city  to visit their country cousin. The children discover an old, mostly abandoned summer colony of houses near a swamp that used to be a lake. There, they meet another brother and sister team with the most peculiar names.

Minnehaha Cheever and Pindar Paton are living happily  in the place where they spent their summers as children. The pair are out of a time machine. Not literally but nearly. The pair wear old-fashioned clothes stored away many years ago by their family. Each is a gardener,and  conservationist.  They have several gardens which they live off of, as well as having chickens, goats, a duck, and a cat named Fatly. Ms. Cheever is also an avid pickler and preserver. Once a month, Pindar cranks up the antique Franklin car and drives into town for supplies.

The children come across a group of old houses, mysteriously vacant and abandoned on the shore of a swampy lake. Somebody has been there — there’s a warning and an inscription carved into a rock. Can the children keep their find a secret? Who left the houses and where did they go? What’s lurking in the lake?

Gone Away Lake is a wholesome tale of honesty, integrity, and plain and simple fun living.

Is there someplace by your home that you’ve always heard about but have never visited? After reading Gone Away Lake, I told my children about an abandoned vacation village way up in the Great Smoky Mountian National Park. Elkmont Village was once a great summer getaway. When Elkmont became part of the National Park system everyone had to leave. These homes have been vacated for years. Some of them still have household items inside. Currently, there is a restoration idea going a round to restore some of these cottages and the old hotel.

My kids were stunned. They’ve hiked in the Smokies tons of times but never knew of this secret and hidden village. 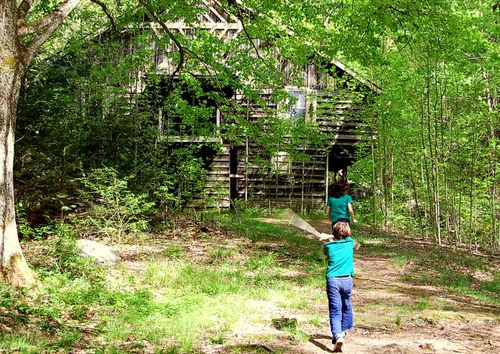 It was while reading the book that this idea of discovering Elkmont Village came to mind. In fact, it was this quote:

And their island had many things to offer besides the cottage: The woods that smelled so sweet; the pale little crowds of Indian pipes and the orange jack-o’-lantern mushrooms that pushed up the needles. There was a broken rowboat at the northwest end of the island, which could be used as a Lockheed F-90, a rocket ships, an atom-powered submarine, and sometimes even a rowboat.

So off a-explorin we went.

Is there a house or a homestead in your hometown or community that has that mysterious, creepy, abandoned look to it? Take the time to let your imagination and creativity run wild. Make up your own adventure about the property and it’s history.

Who used to live there and what was their life like?

What was their family like? Did they have unusual hobbies?

What was their reason for leaving?

FictionTeachers.com has a great tutorial on writing your own Mini Mystery HERE