As everyone may already know, plans are in full swing for our second Multicultural Children’s Book Day on January 27th! Created by myself and the amazing Mia Wenjen from PragmaticMom and myself, event has a goal of not only shing the spotlight on all of the amazing diverse and multicultural children books, authors and illustrators, but also to get these very books into the hands of the children who need them.

To kick off our Author and Illustrator interviews at the Multicultural Children’s Book Day blog, we interviewed Joseph Bruchac …

followed by Jacqueline Woodson! (and stay tuned for Margarita Engle and Cynthia Kadohata!) 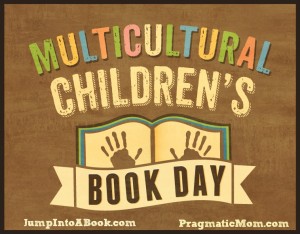 From January 1st through the 25th, the Multicultural Children’s Book Day blog — in collaboration with the Children’s Book Council — will feature interviews with 25 inclusive authors and illustrators, giving you a behind-the-scenes peek at their creative processes. 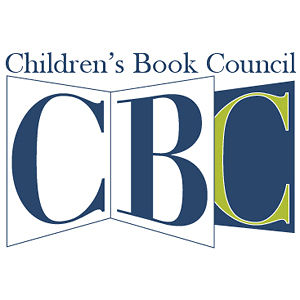 Tracey Baptiste was born in Trinidad, where she grew up on jumbie stories and fairy tales. Her debut, a young adult novel titled Angel’s Grace, was named one of the 100 best books for reading and sharing by New York City librarians. Tracey is a former teacher, textbook editor, ballerina, and amateur librarian who once started up a library in her house in the hope that everyone would bring their books back late and she would be rich! You know, like other librarians. She is now a wife and mom and lives in New Jersey, where she writes and edits books for kids from a very cozy office in her house that is filled with more toys than she can count. The Jumbies is her second novel.

Kathleen Benson is the coauthor of many picture books, including John Lewis in the Lead, which was illustrated by Benny Andrews. She lives in New York, New York.

Tricia Brown is an author, editor, and book developer. She travels often and is a popular speaker in schools, libraries, and events in Alaska as well as the Lower 48. Her multimedia presentations, which include lessons on Alaska natural history and culture, regularly receive high praise from educators and parents. She loves to get kids excited about reading, writing, and art. Her interview here.

JaNay Brown-Wood dreams big. Ever since she was a little girl, she’s wanted to become a published author. Her determination has paid off. Imani’s Moon is her first book for children. JaNay is also a professor of early childhood education. She lives in California. Her interview here.

Andrea Cheng is the daughter of Hungarian immigrants. She writes picture books and middle grade and young adult novels, and also teaches English as a Second Language and children’s literature. She walks daily near her Ohio home. She writes the Anna Wang series (The Year of the Three Sisters).

Lesa Cline-Ransome and James E. Ransome are a husband-wife team who have collaborated on many award-winning picture books for children. These include Satchel Paige, which was an ALA Best Book for Children and a Booklist Top Ten Sports Book for Youth, and Words Set Me Free: The Story of Young Frederick Douglass, which received starred reviews in Booklist and School Library Journal. The Quilt Alphabet was praised as “a blue-ribbon ABC book that combines bright, folksy oil paintings and lilting riddle-poems” in a starred review in Publishers Weekly and called “a feast for the eyes” in School Library Journal.

Matt de la Peña is the author of five critically-acclaimed young adult novels: Ball Don’t Lie, Mexican WhiteBoy, We Were Here, I Will Save You and The Living. He’s also the author of the award-winning picture book A Nation’s Hope: The Story of Boxing Legend Joe Louis illustrated by Kadir Nelson. Matt received his MFA in creative writing from San Diego State University and his BA from the University of the Pacific where he attended school on a full basketball scholarship. de la Peña currently lives in Brooklyn NY. He teaches creative writing and visits high schools and colleges throughout the country.

Kris Dinnison has spent nearly two decades as a teacher and librarian. Nowadays, she helps run the retail and café businesses she owns with her husband, hikes, and spins classic vinyl. This is her debut YA novel. She lives in Spokane, Washington.

Sharon M. Draper is a New York Times bestselling author who has received the Coretta Scott King Award for both Copper Sun and Forged by Fire. Her Out of My Mind has won multiple awards and has been a New York Times bestseller for more than a year. She lives in Cincinnati, Ohio, where she taught high school English for twenty-five years and was named National Teacher of the Year. Her interview here.

Karen English is a Coretta Scott King Honor Award-winning author who lives in Los Angeles, California. Her books have been praised for their accessible writing, authentic characters, and satisfying story lines. Karen is a retired elementary school teacher, and she wrote these stories with her students in mind.

Desirae Foston is a designer and artist based in Brooklyn, NY. Her interview here.

Rachel Isadora received a Caldecott Honor for Ben’s Trumpet, and has written and illustrated numerous other books for children, including Bea at Ballet, Jake at Gymnastics, Say Hello!, Peekaboo Bedtime, the Lili at Ballet series, and several classic tales set in Africa (including Old Mikamba Had a Farm, There was a Tree, The Night Before Christmas, Hansel and Gretel, Rapunzel, and The Princess and the Pea). She lives in New York City.

Kekla Magoon is an award-winning author of many young adult novels, including The Rock and the River, for which she received the 2010 Coretta Scott King–John Steptoe Award for New Talent. Kekla Magoon lives in New York City.

Meg Medina is the author of The Girl Who Could Silence the Wind and the picture book Tía Isa Wants a Car, illustrated by Claudio Muñoz, which won the Ezra Jack Keats New Writer Award. Her most recent young adult novel, Yaqui Delgado Wants to Kick Your Ass, is the winner of the 2014 Pura Belpré Author Award. The daughter of Cuban immigrants, she grew up in Queens, New York, and now lives in Richmond, Virginia. Her interview here.

Jason Reynolds is crazy. About stories. After earning a BA in English from The University of Maryland, College Park, he moved to Brooklyn, New York, where you can often find him walking the four blocks from the train to his apartment talking to himself. Well, not really talking to himself, but just repeating character names and plot lines he thought of on the train, over and over again, because he’s afraid he’ll forget it all before he gets home. He is the author of the critically acclaimed When I Was the Greatest and The Boy in the Black Suit.

Kashmira Sheth was four years old at the first Indian wedding she remembers, and she still cherishes the memory of the festivities in her grandparents’ house. Since then she has attended many weddings but, unlike Sona, has never successfully stolen a groom’s shoes. She is the author of many acclaimed books, including Tiger in My Soup, My Dadima Wears a Sari, and Monsoon Afternoon. Sheth teaches at Pine Manor College, in their Solstice MFA in Creative Writing Program.

Conrad J. Storad is an award-winning author and editor of more than 50 science and nature books for children, Conrad J. Storad is committed to helping students better understand and appreciate the natural world. Conrad visits many schools to teach and entertain children and is now approaching his visit with his millionth student. In 2006, Don’t Call Me Pig! (A Javelina Story) was selected by Arizona Governor Janet Napolitano to promote reading, and more than 93,000 first-graders received a special edition copy. In 2012, Storad’s Arizona Way Out West & Witty, coauthored with Lynda Exley, was selected to represent Arizona as part of the “52 Great Reads” program run annually at the National Book Festival in Washington, D.C. His interview here.

Eric Velasquez was born in Spanish Harlem in New York City. The awards he has won include a Pura Belpré and the Coretta Scott King/John Steptoe Award. He lives in New York State with his family.

Laura Rose Wagner has a PhD in anthropology from the University of North Carolina, Chapel Hill. She lived in Port-au-Prince from 2009 to 2012, and survived the earthquake. She travels to Haiti often, and founded a creative writing group for young people there.

Natasha Yim was born in Kuala Lumpur, Malaysia. At ten, her family moved to Hong Kong, where Natasha attended a very Harry Potter-esque secondary school. This is where she was turned on to writing. She moved to the United States to attend college where she studied Psychology and English Literature. Natasha is the author of Sacajawea of the Shoshone, Cixi: “The Dragon Empress”, and Otto’s Rainy Day. She lives in Ukiah, California. Her interview here.

And please stay tuned for these interviews coming up in January! Thank you!

To examine any book more closely at Amazon, please click on image of book. 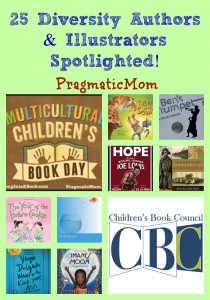 I am an Amazon affiliate which means if you buy anything through my blog, I get a very small kickback at no cost to you. I use this money to pay the postage and handling for my giveaways.