Maybe you’re in the same boat as us. We’ve finished all of the Percy Jackson books… and now what do we read? We want more Rick Riordan!

Or, another boat perhaps we are sharing is aging readers. Our Wonder Son is now in high school. Percy Jackson was such an epic event in his younger years that he is continually searching for books that “grab” him just like Percy Jackson did. So what to do after Percy?

First might I suggest The Lost Hero Series which is Percy Jackson-related AND is also written by Rick Riordan.

Another favorite Rick Riordan series is his Red Pyramid Trilogy. We just loved it!

In the vein of Norse Myths, check out Rick Riordan’s  Magnus Chase

Until then, here are a few Books Like Percy Jackson for grades 6 and above, covering a wide range of ages and interests. They are ALL  series! Happy Reading!

The Lost Years of Merlin Series by T. A. Barron 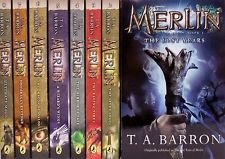 A young boy with no memory or identity emerges from the sea…and discovers his destiny as the most legendary wizard ever to live. (Grades 6-8)

Goddess Wars Series. Athena and Hermes’ search for the cause of their illnesses leads them to Cassandra who may be key to a war started by Hera and other Olympians who have become corrupt anti-gods determined to destroy their rivals.

A twelve-year-old criminal mastermind, Artemis Fowl, brings the fairy folk to their knees when he kidnaps one of their own. (Grades 6-8)

Three teenage descendants of Medusa, the once-beautiful Gorgon maligned in myth, must reunite and embrace their fates. (Grades 9+)

The Hunger Games by Suzanne Collins

In the ruins of a place once known as North America lies the nation of Panem, a shining Capitol surrounded by twelve outlying districts. Long ago the districts waged war on the Capitol and were defeated. As part of the surrender terms, each district agreed to send one boy and one girl to appear in an annual televised event called, “The Hunger Games,” a fight to the death on live TV. Sixteen-year-old Katniss Everdeen, who lives alone with her mother and younger sister, regards it as a death sentence when she is forced to represent her district in the Games. The terrain, rules, and level of audience participation may change but one thing is constant: kill or be killed. (Grade 7 +)

The Maze Runner by James Dashner

Outside the safety of the Glade lies an enormous maze, populated by nightmarish perversions of technology. (Grades 6-10)

Mortality Doctrine series set in a world of hyperadvanced technology, cyberterrorists, and gaming beyond your wildest dreams . . . and your worst nightmares. (Grades 7+)

City of Ember by Jeanne Duprau

Books of Ember Series. Lina & Doon must fulfill the prophecy and help everyone in town survive. So what if the townspeople are all trying to kill them? (Grades (8-9+)

Sea of Trolls by Nancy Farmer

If Jack’s sister had just stayed quiet, they wouldn’t have been captured by Vikings. Little sisters can be so annoying! (Grades 6-9+)

Flinn has lived his entire life inside the gigantic prison known as ‘Incarceron.’ Escape seems impossible…until he meets Claudia, who is trapped in the 17th century by a computer.
(Grades 7-9+)

The Ruins of Gorlan by John Flanagan

A boy who has spent his entire life trying to avoid attention finds himself in the middle of a struggle between titanic forces when he is recruited by an exclusive prep school and followed by sinister agents. (Grades 7+)

Welcome to the Mirrorworld, where the darkest parts of your favorite fairytales are a chilling reality! (Grades 7-10)

The Colony” has existed unchanged for a century, but it’s no benign time capsule of a bygone era— it is ruled by a cult like overclass, the Styx. And before long—before he can find his father—Will is their prisoner…. (Grades 6-9)

In Maddy Smith’s world, order rules. Chaos, old gods, faeries, magic–all of these were supposedly vanquished centuries ago. But Maddy knows that a small bit of magic has survived. (Grades 7+)

The Gatekeepers Series. When Matt gets into trouble one time too many, he is sent to live in a far-away village. Is he the only one who can see the evil below the surface? (Grades 8+)

Dragons exist and Ember is one of them. Trained to infiltrate the humans, she just wants to have fun in her final summer of freedom before joining the Talon, but destiny has another thing in store for her. (Grades 9+)

Scepter of the Ancients by Derek Landy

The Colossus Rises by Peter Lerangis

Seven Wonders Series. Seven pieces of power from Atlantis that disappeared long ago. Cass, Jack, Marco and Aly depend on them to save their lives. (Grades 6-9)

The Young Elites by Marie Lu

Adelina survived the blood fever, an illness that killed many, but left others with strange supernatural powers. Cast out by her family, she joins a secret society called the Young Elites and discovers her own dangerous abilities. (Grades 8+)

The Apothecary by Maile Meloy

When the apothecary is kidnapped, Janie and Benjamin must uncover the secrets of the sacred
Pharmacopoeia in order to find him and save the world. (Grades 6-8)

A World without Heroes by Brandon Mull

Beyonders Series. Jason and Rachel are pulled into the mysterious, troubled realm of Lyrian. All they want to do is get back to their own world, but they may have to stop evil wizard emperor Surroth first. (Grades 6-8)

Mark of the Thief by Jennifer Nielsen

When slave-boy Nic is forced to enter a cavern containing lost treasures, he discovers an amulet that belonged to the great Caesar and is filled with a magic once reserved for the Gods — magic some Romans would kill for. (Grades 6-9)

Here, There Be Dragons by James A. Owen

One choice can transform you. Beatrice Prior’s society is divided into five factions—Candor (the honest), Abnegation (the selfless), Dauntless (the brave), Amity (the peaceful), and Erudite (the intelligent). Beatrice must choose between staying with her Abnegation family and transferring factions. Her choice will shock her community and herself. But the newly christened Tris also has a secret, one she’s determined to keep hidden, because in this world, what makes you different makes you dangerous. (Grade 9+)

Lost as a child, Septimus Heap must reunite with his true family & learn the magyk arts.
(Grades 6-8)

The Alchemist by Michael Scott

The Immortal Secrets of Nicholas Flamel Series. Two teens are caught up in a battle between ancient alchemists looking for the secret of immortality. (Grades 6-9)

The Grimm Legacy by Polly Shulman

‘The Grimm Fairytales were just stories,’ or so Elizabeth thinks, until she discovers that some of the more famous and magical objects are very, very real! (Grades 6-9)

The Learning Institute for the Very Enlightened… where they train you to be a criminal mastermind. (Grades 6-9)

The Amulet of Samarkand by Jonathan Stroud

The Bartimaeus Trilogy. When young magician Nathaniel summons the ancient, powerful, and mischevious djinni Bartimaeus, he gets more than he bargained for! (Grades 6-9)

The Shadow Thief by Anne Ursu

Cronus Chronicles Trilogy. Charlotte sneaks into battle with a Greek demigod, then gets grounded for it. Still, she continues on to fight the malevolent forces of the underworld. Charlotte’s life is tough! (Grades 7-9)

World War I is waged between the ‘Darwinists,’ with their fantastic genetically-altered creatures, and the ‘Clankers,’ who pilot giant robots. Aleksander and Deryn are caught in the middle! (Grades 7+)

See any good titles here? Any favorites? Any on your “must read” list? Please share in the comments below!

***some of these links are affiliate links

************
Looking for a better guide for successful homeschooling? The Waldorf Homeschool Handbook is a simple step-by-step guide to creating and understanding a Waldorf inspired homeschool plan. Within the pages of this comprehensive homeschooling guide, parents will find information, lesson plans, curriculum, helpful hints, behind the scenes reasons why, rhythm, rituals, helping you fit homeschooling into your life. Discover how to educate your children in a nurturing and creative environment.

8 thoughts on “The “Like Percy Jackson” Booklist for Middle Readers”