Skip to content
— Dragons Are Real, Something To Do —

The Disney movie Pete’s Dragon is undoubtedly by storm. But the 2016 movie is actually based on a musical that came to life in the late 1970’s. Pete’s Dragon was a 1977 American musical live-action animated film directed by Don Chaffey, produced by Jerome Courtland and Ron Miller, and written by Malcolm Marmorstein. 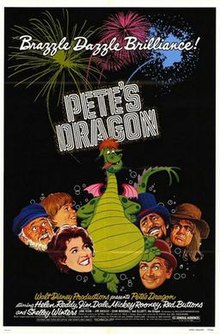 The original story is set in the early 1900s, a young orphan named Pete flees his abusive hillbilly foster family, the Gogans, with help from a huge dragon called Elliott who can make himself invisible. Pete and Elliott visit a small fishing town called Passamaquoddy, where the unseen Elliott’s clumsiness causes Pete to be labeled a source of ill luck. Lampie, the drunken old lighthouse keeper, stumbles out of a tavern and encounters Pete. Elliott makes himself visible, and a terrified Lampie runs into the saloon to warn the townsfolk. In a seaside cave, Pete scolds Elliott for causing trouble. Just as they make up, Lampie’s daughter Nora appears. She says that due to the ongoing tides from the sea, it’s unsafe for Pete to stay. She offers him food and shelter at the lighthouse, which Pete accepts. Pete tells Nora of the abuse he suffers at the hands of the Gogans and, as Nora offers to let him stay the night at the lighthouse, they strike up a friendship. Pete learns the story of Nora’s fiancé, Paul, whose ship was reported lost at sea the previous year. Pete promises to ask Elliott about Paul, and Nora accepts, believing Elliott to be an imaginary friend.-wikipedia

Desert Chica has a great idea on how to Make your own Elliot with this easy Pete’s Dragon craft using a pool noodle & craft supplies!

Give your own little Dragon flight with this DIY Cheerios box dragon wings activity!

Then round up everyone and head for the kitchen to enjoy a little Dragon-inspired cooking. My Dragon Bread recipe is sure to please!

And while your at it, learn a little more about Dragons and how they are not only among us, but simply not as fierce as everyone thinks! My newest book, Dragons are Real is available and the excitement is almost blowing the roof off at Jump Into a Book/Audrey Press headquarters!

SO…what if I told you that all of the fairy tales, myths and legends that have been told about dragons over the years are WRONG. What if I told you that Dragons are indeed Real and that they are different than you’ve ever imagined?
This fairly true story is based on the author’s childhood friendship with a REAL live Dragon; a very special Dragon that she and her brother spent two magical summers with.

As readers turn the pages and learn the truth about Dragons, they will see that the fiercest beasts in known history can actually be the best of friends. It’s a lesson in finding companionship in the most unusual of places. Dragons are Real is a magical book filled with stunning illustrations and hints that dragon are indeed all around us

Dragons are Real is now available for purchase on both Amazon and Gumroad! We are also offering a special free bonus gift of a Dragons Are Real Inspiration Activity Guide when you purchase your copy of this enchanting picture book.